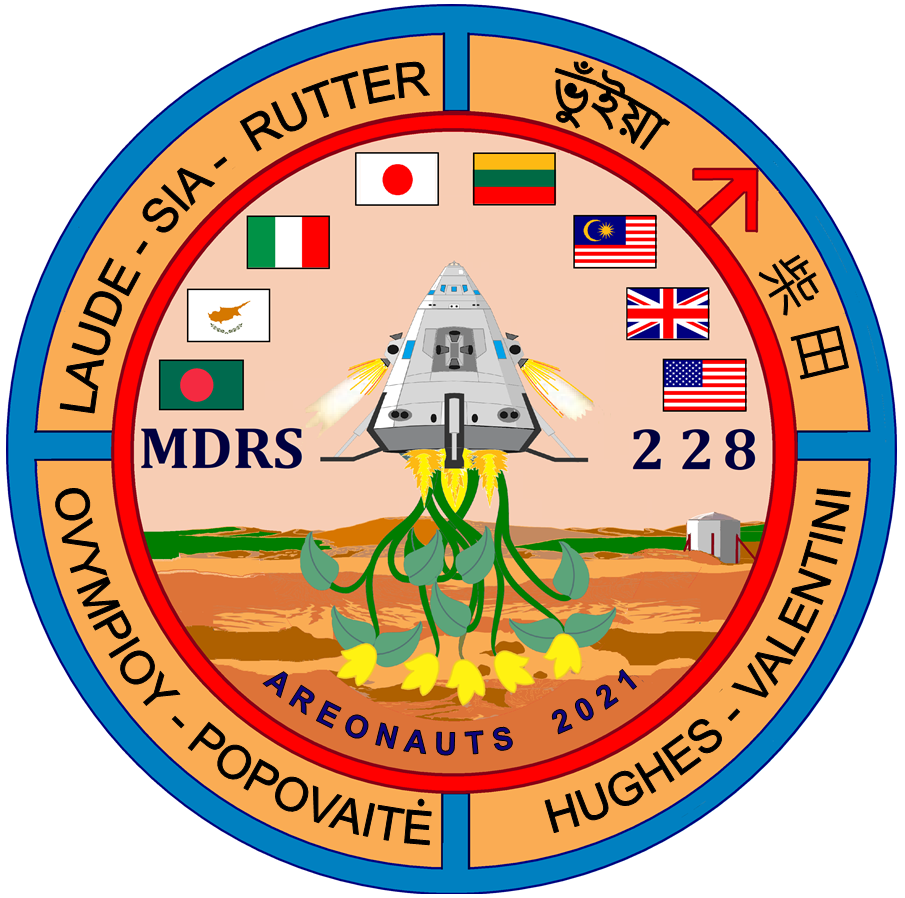 Mission patches are emblems designed and worn by astronauts and people affiliated with a space mission. The first patch was worn in 1963 by the Soviet cosmonaut Valentina Tereshkova on Vostok 6. Tereshkova’s patch, however, remained hidden beneath her spacesuit. The idea of designing patches for space missions came from the military, as most of the first astronauts had a background in the military. NASA astronaut Gordon Cooper began the tradition within the United States space programme in 1965. The “Cooper Patch,” designed for the Gemini 5 mission, depicted a horse wagon symbolising the mission’s pioneering spirit and the motto “8 Days or Bust.” Gemini 5 set a new record for the longest crewed space flight – 7 days, 22 hours, 55 minutes and 14 seconds.

The crew of MDRS 228 chose to follow in this tradition by designing a patch representing the aims of our mission in a visual form. To do so, we commissioned renowned space artist Tim Gagnon. Born and raised in East Hartford, CT, Tim has had a life-long fascination with space exploration and art. Tim has designed patches for many Space Shuttle and International Space Station crews. Working with collaborators Dr. Jorge Cartes and Bill Coukoulis Jr., Tim artfully turned rough sketches and ideas proposed by the crew into a striking emblem.

The crew of MDRS 228 are proud and honoured to wear the patch to the Mars Desert Research Station. The MDRS 228 mission patch is made up of a number of elements:

The foreground image is of a lander arriving on the surface of Mars. Foliage extends from the bottom of the vehicle. This has several meanings. It symbolises the plants that humans will need to grow in order to survive on the Red Planet. It references the social roots that we believe humanity will one day lay down on Mars. It also represents roots of knowledge – the passion for space exploration, science and technology that we hope our mission will inspire amongst young people. The green terrain in the background symbolises the future terraforming of Mars – the possibility that one day humans will transform the planet from a hostile environment into one that can sustain life. Also visible in the background is “The Hab” - the two-story building, just 8 metres in diameter, where our crew will live and work at the Mars Desert Research Station.

Our crew is drawn from seven countries – Cyprus, Italy, Japan, Lithuania, Malaysia, the United Kingdom, and the USA. The flags are arranged in alphabetical order. Each country has an equal place in our crew, hence our mission motto “Multi terris – unus finis” – “Many countries – one goal.”

The diversity of our crew is further reflected in the use of our native alphabets to spell out our names.

The use of astronomical symbols to depict the planets dates back to antiquity. Two of these appear as borders in our patch. Earth can be seen in the blue cross representing the Equator and meridian, dividing the Earth into four sections. The red symbol for Mars, ancient god of war, represents a shield crossed by a spear.

No, it’s not a spelling mistake! We chose to call ourselves “The Areonauts” after Ares, one of the 12 Olympians and the god of war in Greek mythology. In Roman mythology, Ares was called Mars and the Red Planet was named after him.